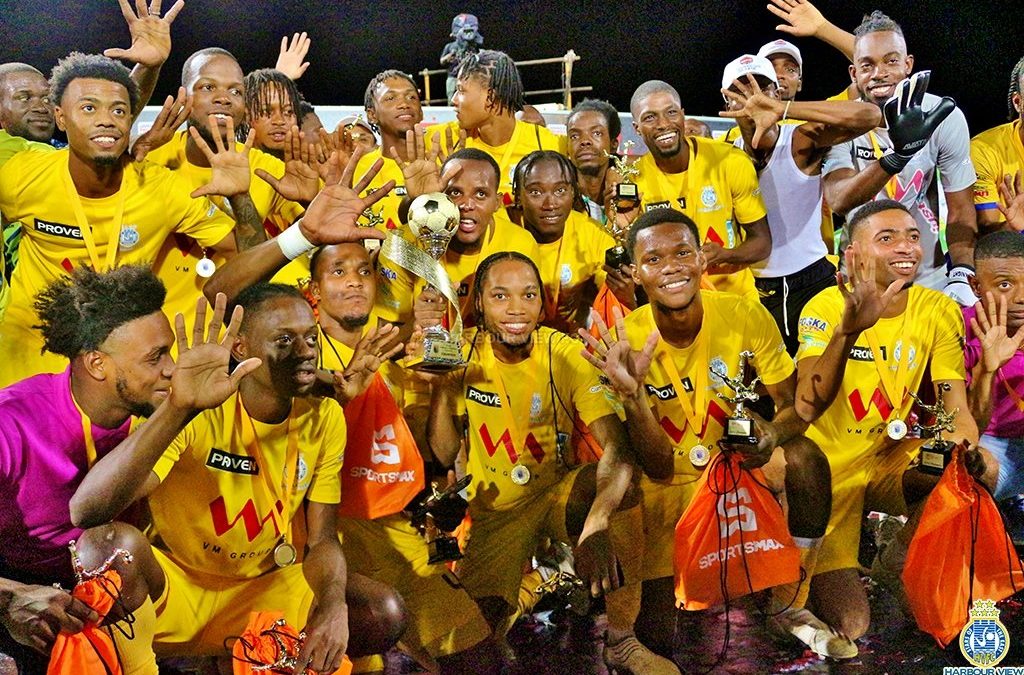 In a pulsating match Harbour View won 6-5 on penalties to claim their fifth national title. The teams had played to a 1-1 draw after full and extra time.

“It always feels good to win a championship. I am really glad for the players. It is always good to have these experiences to take through a lifetime. We fought a very hard battle. There were times we were up and times when we were down. But in the moments when we were down we stuck together and got it right,” said Bernard.

“It all paid off. The players wanted this. We qualified in sixth place and took it from there because we didn’t have anything to lose because we weren’t supposed to be in the party. But we wanted it more than anybody else and in the end it was a fantastic season,” he stated.

The game had hardly got under way when Jahshaun Anglin slipped a pass to Colorado Murray who fired low into the far corner. However, Dunbeholden were undaunted and in the 22nd minute Shakeen Powell’s poor control denied him a great chance. Six minutes later the lively Kimoni Bailey got behind the Harbour View defence but pulled his shot across the face of goal.

Harbour View then had good openings through Phillon Lawrence and Trayvone Reid, who failed to hit the target.

But Dunbeholden kept moving forward in the persistent drizzle at the venue and Bailey and Phillips went close with good chances. Early into the second half, Murray had a great chance to add to Harbour View’s lead but his shot whistled past the upright.

However, Phillips who had spurned a chance minutes earlier, popped up at the back post in the 56th minute to stab home Atapharoy Bygrave’s cross for the equaliser.

Timar Lewis had a good chance to put Harbour View back in front but shot high from 12 yards. Then Nicholas Hamilton had a great opportunity to add to his semi-final heroics but he could not turn home a loose ball from three yards.

As the game intensified, both teams got good openings. Christian’s shot across the goal just missed the lunging boot of Bygrave and Oshane Staple fired over in the dying seconds for Harbour View.

The teams continued to trade punches in extra-time and both had good opportunities. However, when they failed to separate themselves, penalties had to decide the outcome.

“We are disappointed because we had a few chances to finish it in extra-time. It was a worthy final but once it went to penalties anything could happen,” said Dunbeholden coach Harold Thomas.