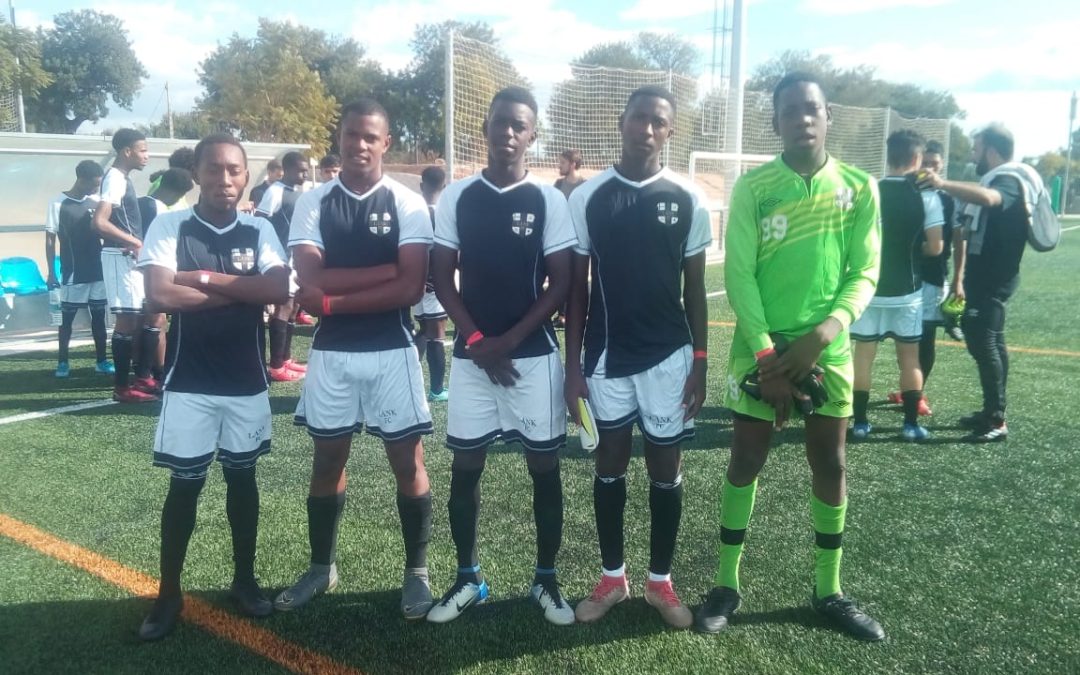 The youths are on the final leg of preparations to meet at the Complex Gate. They walked to the field and the changing room after team talk for the Tournament opening game at 4pm against Spanish club Salou from around this area.

Lank FC has 5 games of 25 minutes each half, with 20 players in the squad rotation registration so everyone will play between now and Sunday. All will have a playoff game for final rankings, based on League collective points standing accumulated. First place will play second place for Championship honours, while third plays fourth place, and fifth plays sixth place.

Our players were assigned official numbers in the tournament:

Good team play of 6 passes from the back after 5 minutes produced a left-sided cross from Matthew Andreas (#21), headed home by Captain Luca Carbone (#7) to open the tournament scoring, 1-0 Lank FC.

Molik Khan (#8), the tall Trinidad striker drove home the second goal after 8 minutes, 2-0 from inside the penalty area. Lank FC set into a period of dominant possession as left winger, Matthew, floated yet another square onto the head of Ja-Shawn Thomas (#9) to create distance as UD Salou were under pressure after 15 minutes. Halftime 3-0.

2 substitutions before halftime as 5 more changes at the break kept the intensity high. The first minute of the second half produced a goal down the centre of the field as attacking midfielder Allan Monyard (#10) scored,
4-0.

The rhythm maintained, Lank FC poured it on with the efficient passing game to build understanding in teamwork. All 20 players did well in participating. Lank FC starts out the Barcelona Gold Cup Tournament winning by 4-0 over UD Salou.